NEWS DETAIL
You are here: Home » News » Industry News » What Are Ellipsoidal Lights Used For ?

What Are Ellipsoidal Lights Used For ?

Ellipsoidal light, or Ellipsoidal profile spot (abbreviated to ERS, or colloquially ellipsoidal or ellipse), ellipsoidal spotlight. There are many beam angles that can be selected and applied according to needs. The main feature is that it can cut the light spot into various shapes such as squares, diamonds, triangles, etc., or project various patterns as needed.

LED ellipsoidal light or Ellipsoidal profile spot, ellipsoidal spotlight. The light source adopts 150W/200W COB LED. It is an all-rounder. Its performance in color and brightness is almost as beautiful as an ordinary incandescent lamp, long-distance projection and high-precision optical system. The strong power may bring twice the luminous flux. At any position of the performance venue, you can choose the application according to your needs, projecting soft spots or sharp images. The main feature is that the spot can be cut into squares, diamonds, triangles and other shapes like a slide, or projected as needed. All colors are more transparent, all subtle changes in color can be faithfully presented, the spot is uniform, the cut light is clear, and the boundary is free of stray light. It is mostly used in large theaters, large TV stations, press conferences and other occasions.

The LED theater profile spotlight system is designed for studios and other applications that require high-definition lighting.

To ensure the light is most cost effective for our customers, we have applied digital LCD display with four buttons as the display control system. RDM function is built in the light, making it the easiest for remote control on the console only.

②Strengthen the effect of stage performance: meet the needs of the plot, make the background appear natural, set off, suggest and induce the development of the plot, and adjust the atmosphere (actors, audience).

①Intensity (referring to the brightness of the light): There must be enough light so that the audience can see the color, appearance and details.

②Distribution: Including the distribution of light usage and the direction of shooting to the stage, the main body must be obviously different from the supporting role and the background (color) and the brightness can be distinguished.

③Color: Relying on colored paper, computer toning and other methods to meet the needs of the plot.

The role of stage lighting in modern stage performances:

①lighting performances, allowing the audience to see the actors’ performances and sceneries clearly;

④creating the space environment needed in the play

⑤Improve the atmosphere in the play;

⑥Show the transformation of time and space, highlight the contradictions and conflicts of the drama, strengthen the rhythm of the stage, and enrich the artistic appeal. Sometimes it also cooperates with stage stunts. 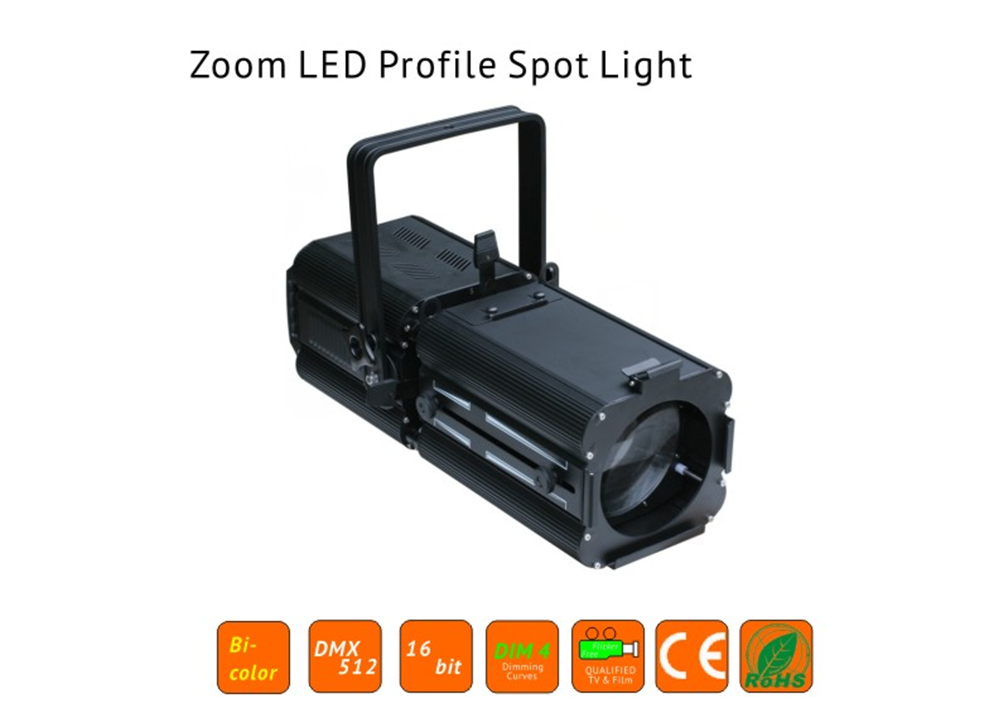 The 19°-50°zoomLED profile spotlight adopts high CRI Philips lamp beads with 3200K, 5600K optional, can emit a pure beam without noise and shadows, and provides rich saturated colors and soft tones for the stage. Realize 0~100% linear dimming, with a perfect dimming system that adjusts from 0 to 100% without color change. Of course, even if there is a shooting demand on the spot, there is no need to show up. The color rendering index of the 19°-50° zoom led profile spotlight is Ra≥95, the special CRI is R9≥90, R15≥90, which guarantees high-definition shooting and video transmission.

The LED ellipsoidal light is a general stage surface light and side light, which has a wide range of applications. The common led ellipsoidal lights on the market are generally general LED and zoom LED profile spotlight.

How to choose the face of the school stage? Ellipsoidal reflector spot, the light color is transparent and evenly clear

Many schools are now enriching their own teaching equipment and promoting the development of students in all aspects. Building a stage has become the choice of many school leaders. The school stage is generally not large. The scale of construction depends on the scale of the school. Generally, it has multiple functions. The functions of the auditorium, academic lecture hall, and literary performance stage must all be realized. These needs must be met at the same time. The surface light effect is very important. How can we choose the stage surface light for the school stage? Choosing the LED profile light can solve this problem, and the light color is transparent and uniform.

The area of the school stage is generally not too large. Generally, it is a small and medium-sized stage. The stage lighting needs to be changed accordingly. It is good to use multiple lights. The quality of the lighting should be high. Secondly, the price of the lighting should be considered. Leko light meets this requirement very well. The leko light of VanGaa adopts COB light source, the light is pure and uniform, clear and white, which can lay a good style for the school stage, whether it is used as a stage surface light, a multifunctional hall surface light, or an academic lecture hall surface light; secondly, the LED profile light has soft light border. As a stage surface light to illuminate the face of the person, IT effectively eliminates shadows and facial darkening, ensuring that people on the podium is in a good state, and the face is shiny. In the end, the COB light source of the Ellipsoidal profile spot has a high CRI, the light color is consistent, and high-definition shooting is guaranteed.