Stage lighting is mainly reflected in people's eyes, Studio lighting is more important through the TV picture. For TV lighting, camera is an important equipment. Drama stage is based on the human eye as the frame, while TV video is based on the camera as the frame, which is a different perspective. The stage performance is that the human eye is experiencing the stage, and the personal perspective is different; while the TV program recording is that the camera is observing the stage, and the camera is multi position and multi perspective. The television picture is shot by the camera, where the camera and cameraman reflect the light, and then through the director to select and edit the pictures of multiple perspectives, which are presented in front of the audience through the transmission of television signal. This is a big difference between stage performance and TV picture. 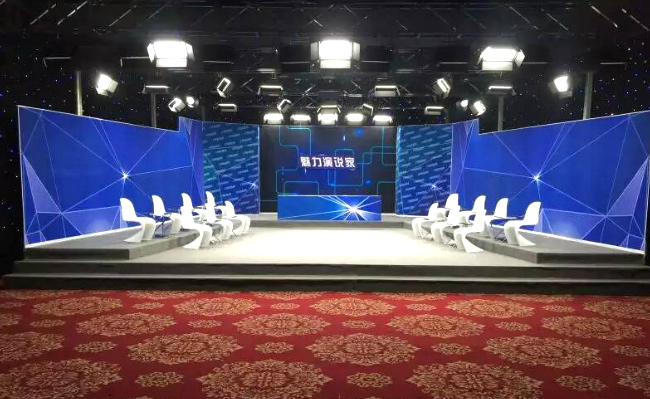 The visual range of the human eye is relatively large, that is, the range of brightness that can be felt is relatively large. Whether it is sunny or dim, the human eye can see objects and distinguish details through the free adjustment of the pupil. As far as the stage lighting viewed by human eyes is concerned, the brightness of the stage and the scene is as long as the audience's vision is comfortable.

Studio lighting illumination is to ensure that the camera can be adjusted to the appropriate aperture to get a clear picture.

Light ratio refers to the ratio of brightness value between light and dark formed by light projection on the scene. Using different light ratio modeling on the scene can present different artistic effects, with large light ratio, strong contrast and great visual impact; with small light ratio and soft contrast, people can feel a kind of relief.

Designers often use different light positions such as face light, ear light, side light, backlight and background light to distribute light. According to different effect requirements, the illuminance configuration and light ratio of different light positions are different. But generally speaking, the light ratio of TV lighting should not be too large. If the light ratio is too large, the picture reflected by the camera will be exposed on the bright side, Or the dark side becomes black paste. Lighting designers should adjust the light ratio of the illuminated object timely if they find this situation in the TV picture during the stage of joint rehearsal and rehearsal.

The task of TV lighting is to control the illumination and light ratio of the scene, and make the scene get a good visual effect through the camera.

Tomorrow we will talk about the requirements of color and color temperature.

VanGaa Lighting Co., Limited is coming, 14 years of precipitation, exquisite workmanship, to meet your requirments with more thoughtfulness. With average more than 10 years of experience, the engineers team, provide personalized customized services, all kinds of complete, rich styles, can meet different customers’ needs. Welcome to contact us by phone/Wechat/Whatsapp: 0086-131 6834 9227.