The stage lighting configuration of the school lecture hall first considers practical value and mature technology, and try to improve the use of the lecture hall to ensure the safety, ease of operation and durability of the stage lighting equipment, and at the same time make a reasonable lighting configuration plan according to the budget . The school lecture hall is mainly used for conferences, lectures, lectures, training, academic exchange reports, and performances. On the one hand, it meets the lighting of the conference and on the other hand, it must meet the lighting effects of the performance. According to national standards, it is usually equipped with surface light, top light, slap light, side light, backlight, heaven and earth light and stage effect lights.

The configuration of face light and slap in the school lecture hall:

The white LED par light with face light and slap light, with high luminous efficiency and bright color, creates a three-dimensional and artistic image of characters. The face light was cast onto the stage from the front of the auditorium at a 45° angle. Slap lights projected from both sides of the auditorium in the lecture hall to the stage, used as modeling light in the oblique direction of the front of the stage, to enhance the three-dimensional sense of characters and scenery, and form the lighting effect of the front side. If the budget is sufficient, LED spotlights can be used as face light and slap light.

The top light can adopt LED tri-color flat soft light, and the backlight adopts full-color LED par light. The ceiling light is installed above the stage with a ceiling light every 1.2M-2.0M, and the lamps are hung under the boom, whose function is to provide necessary lighting for the performance space in the depth of the stage. The top light includes forward light and back light, which can be arranged overlappingly on the same light pole. The lamps can be configured according to the needs of the performance, and the function is to make the stage performance area obtain a more uniform color. 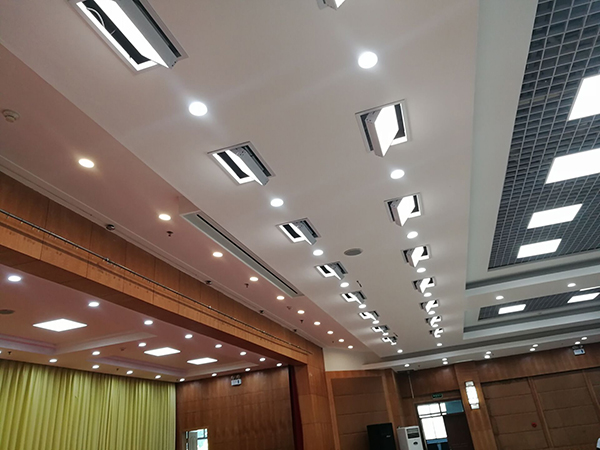 The side light can be white LED par light or LED spotlight. Its role is to create a sense of direction of the light source from the side of the stage, to shape the level and three-dimensional sense of the actors in the main performance area, which can be used as auxiliary lighting to illuminate the faces of the actors, and can strengthen the level of the scenery, and render the characters and the stage space environment.

The effect lights can be computer moving head lights or LED par lights. Computer moving head lights are rich in color mixing, and can be used to project various graphics and even slides using replaceable gobos. Now they are usually used for stage pattern changes and changeable beam swings. The LED par light has bright colors and 1670 colors, bringing brilliant lighting effects to the stage.

In the stage lighting configuration of the school lecture hall, if the budget is not large, you can directly configure the top light and surface light, because after all, it is not as demanding as a large-scale stage performance. The top light can use embedded LED three-primary color conference lights or hanging LED three-primary soft light, and the surface light can use full-color LED par lights, which can satisfy general performances and lighting.