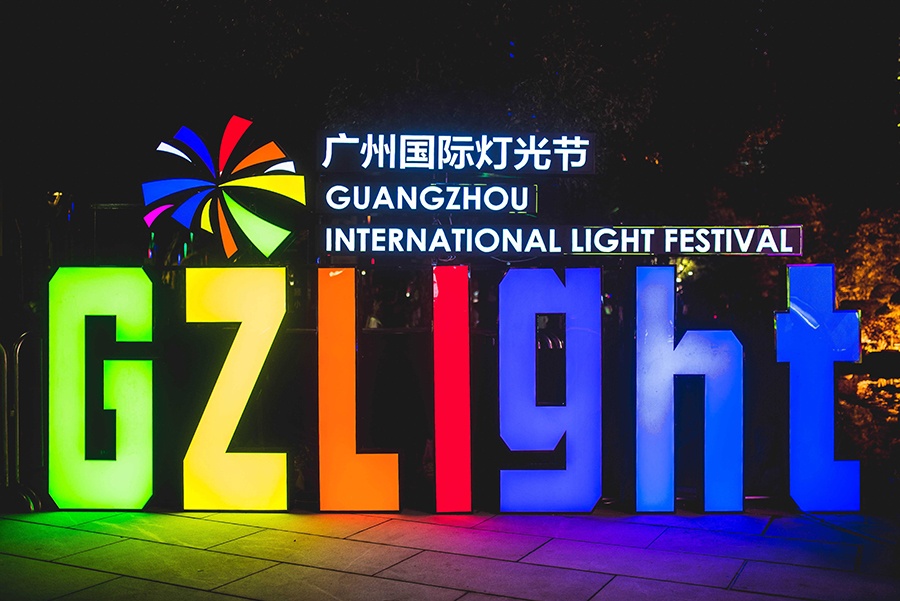 The 8th Guangzhou International Lighting Festival opened at Huacheng Square on the evening of November 26th, and ends on April 25th, 2019. In the past seven years, it has developed into one of the three major light festivals in the world, as well as the French and Sydney Light Festivals. Let's take a look at how beautiful it is~!

This year, with the theme of "40 years of reform and opening up, the new era of Guangyu Flower City", the main venue of Huacheng Square and seven bridges (Jiefang Bridge, Haiyin Bridge, Liede Bridge, Haizhu Bridge, Jiangwan Bridge, South China Bridge) will be set up in the main venue of the Pearl River. , Pazhou Bridge), the 12 corridors of the Pearl River New Town, and the Huangpu district venue, with a total of 41 sets of lighting works. 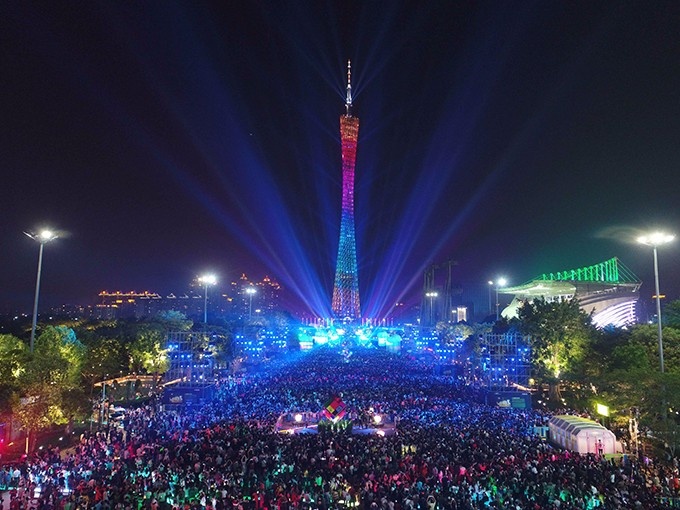 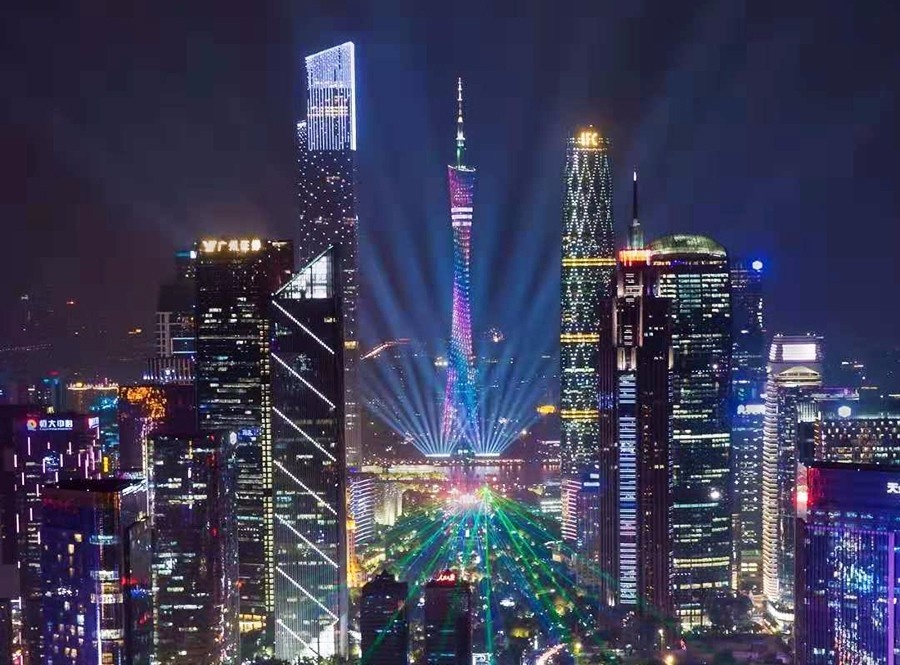 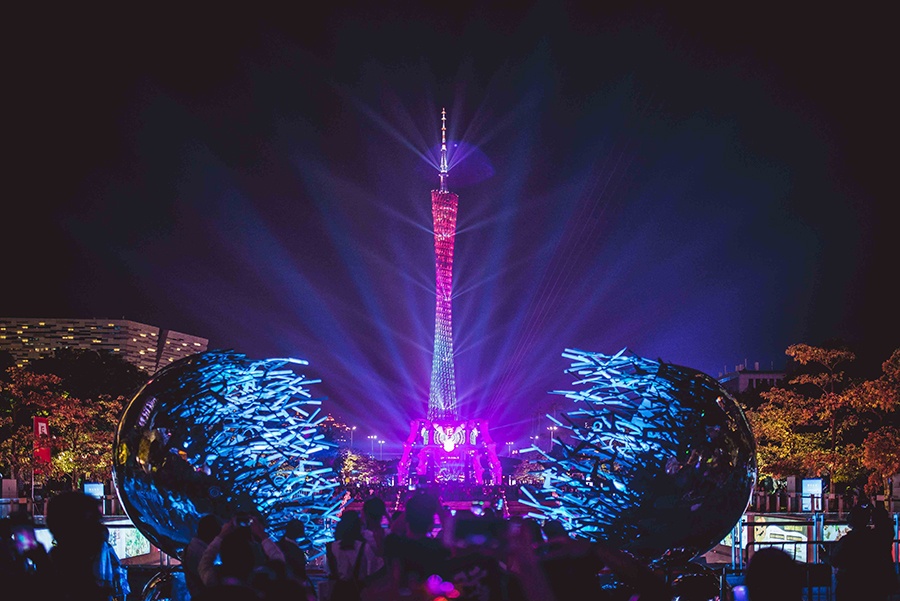 300 drones were integrated into the light show for the first time, constantly changing patterns, from gears to phoenix to square matrix, from the light festival logo to the city line composed of multiple landmark buildings. I can't take care of my amazing eyes! 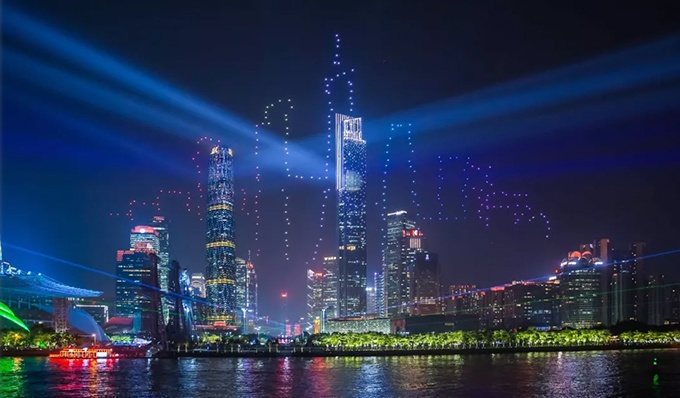 At night, the brilliance of the bridge is reflected on the water of the Pearl River, turning the river into a colorful illusion, bringing a rare and eye-catching impression to the endless stream of cars, riverside walkers, and river cruisers. 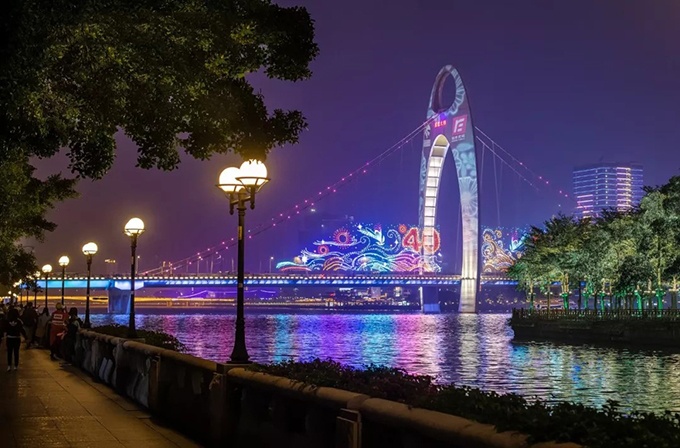 This time, Liede Bridge has a taste of the New Year's light show. It successfully integrates the traditional Guangzhou festivals into the lighting art, allowing more tourists to read the stories of Guangzhou through the lights, stay in Guangzhou for the New Year, and welcome 2019! 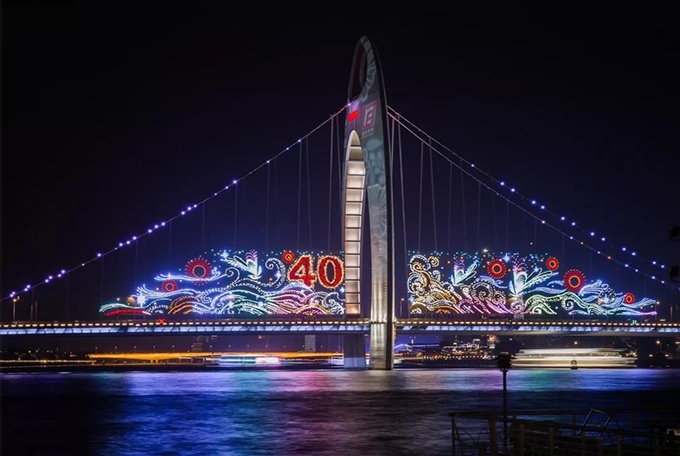 The water curtain interpretation of "The Light of Times" expresses the expectations of 40 years of reform and opening up and the future development of Guangzhou. It gathers the voices of all walks of life. The light and shadow are intertwined under the sun, and the colorful lights overflow in the night, making beautiful memories and beautiful visions. Present to the audience. 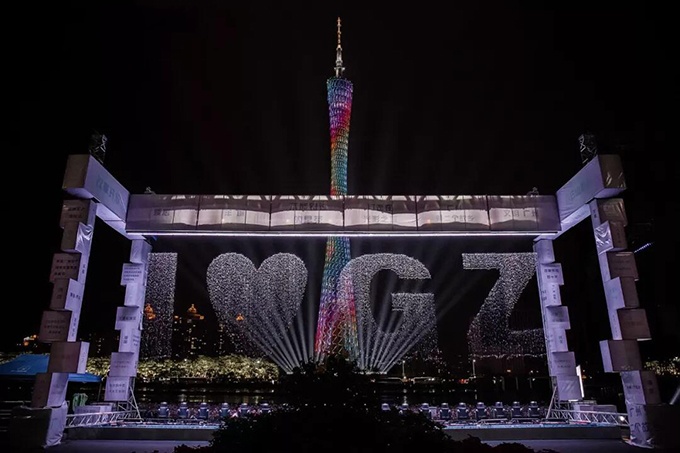 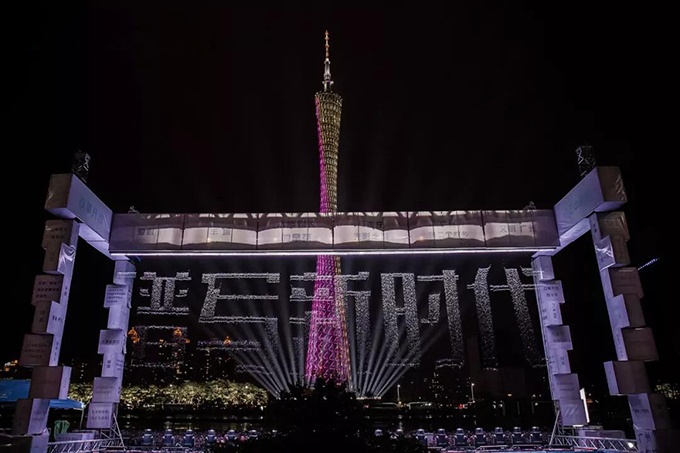 In a modern city where steel and concrete are combined, trees represent the origin of life, adding vitality to the cold city. The tree of light combines light with trees, showing a kind of thriving vitality, presenting different lives throughout the year. Form: Spring is agile, summer is enthusiasm, autumn is quiet and beautiful, and winter is vigorous. At the same time, it also indicates that the pace of human progress will never stop. 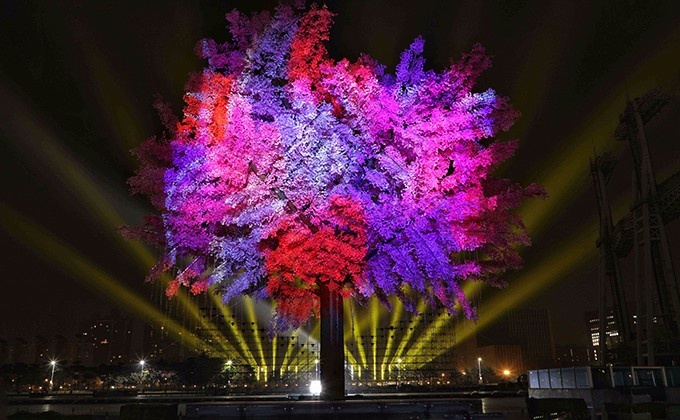 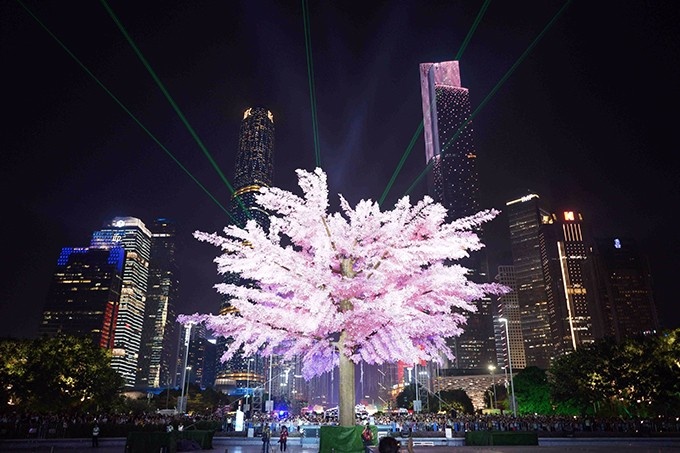 This work is based on the concept of "people and cities, cities and earth", with the self-luminous earth as the core, and the outer sphere is hollowed out to engrave the names of cities around the world, combined with the changing rainbow clothes on the track, symbolizing the close development of people and cities Connectivity. 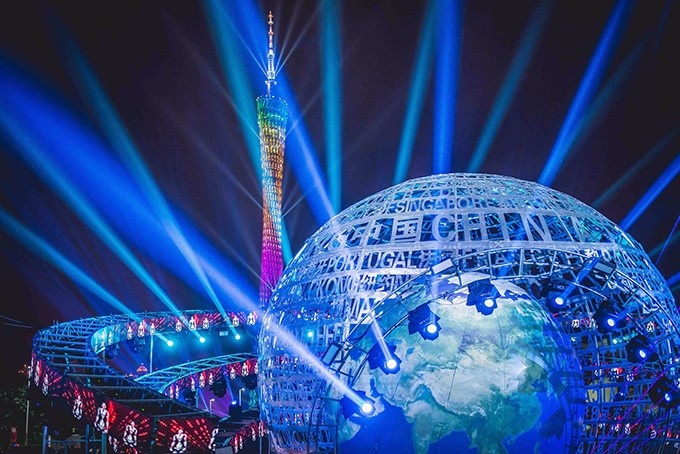 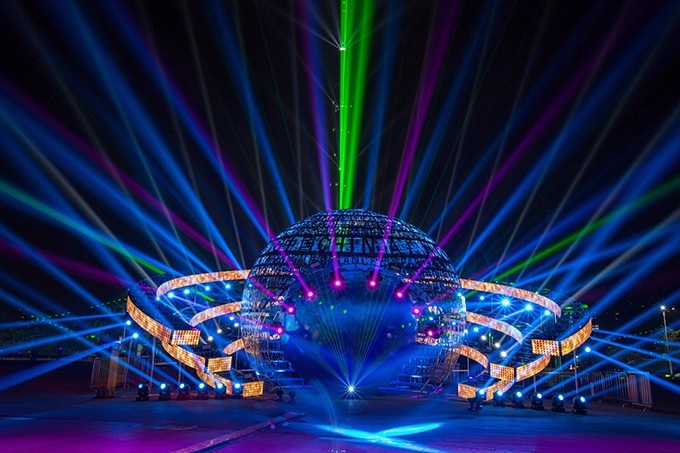 Under the background that the world has entered the urban era, cities will be an important issue for the future development of the world. The colorful clouds in the city, which symbolize beauty and hope, gather in the South Square, weaving a dreamy and colorful “clouds” for our beautiful flower city. 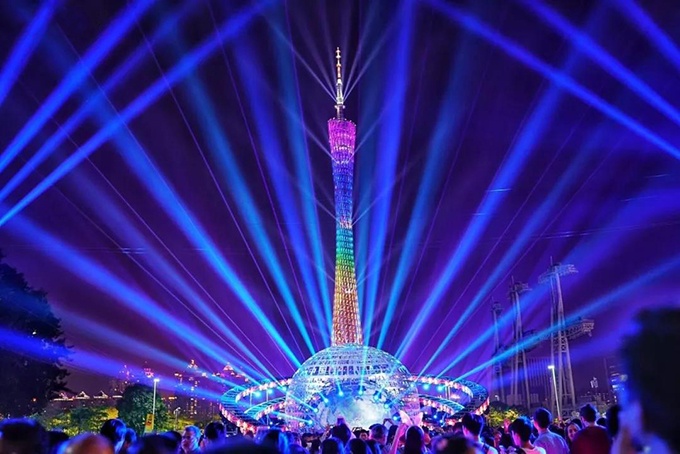 Raining on Basho, Grand Theater Water Screen Projection Show, Great Wheel of Times, Times Corridor, and other works interpret the impassioned symphony of the times under the night scene of the new Guangzhou city with full emotions, in order to commemorate that which has influenced and changed all of China and inspired The era of great change across China.

In Linfen, Shaanxi, the first gate in the world, a monument of Chinese civilization and the first gate cultural tourism landscape. It also combines traditional content with modern technology through light shows, and uses photoelectric technology, 4D imaging, architectural projection and other means to complement each other with light, sound, and image, highlighting ecological experience, historical and cultural experience, festival activities and other functions. The new cultural tourism product created by the combination of, culture and tourism has become a comprehensive cultural landscape in Linfen that meets tourists' sightseeing, entertainment, leisure, shopping and dining. 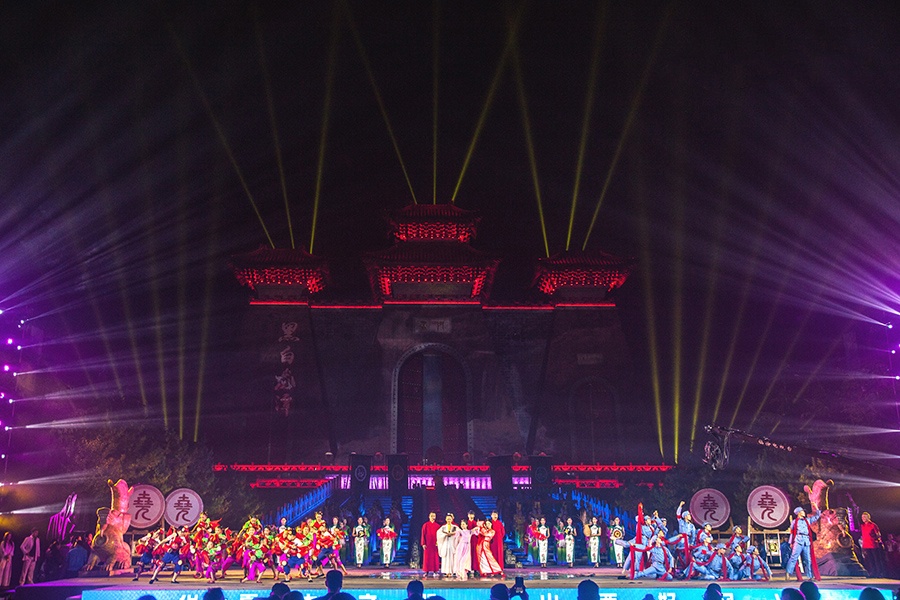 Dozens of lights make the night view of Huamen magnificent. Among them, Liming Optoelectronics' 120 350W waterproof beam lights are arranged in two rows in Huamen Plaza. The large-aperture light beam extends to the 50-meter-high gate building, the light and shadow are staggered and the sky is bright; The effect can be opened and closed, creating a fantasy effect of wide-angle diverging light beams. 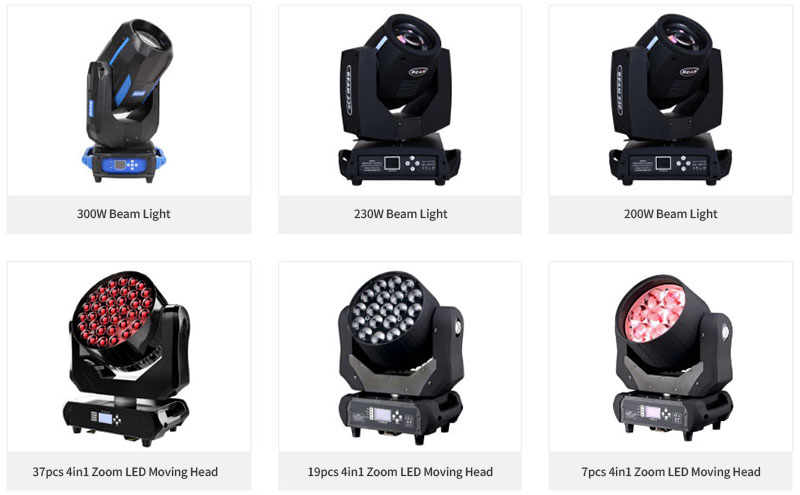 We have worked hard for each stage lighting project. After more than ten years of development, we have gathered a group of skilled and experienced technicians who continue to invest in R&D and innovation of technology and have independent R&D and production capabilities. 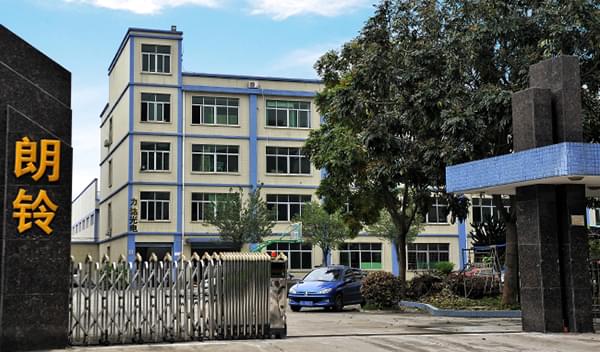